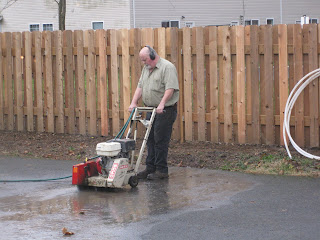 After much hard work and determination the water line finally got put in and finished. Or should I say got replaced and covered? We still need to add more dirt & gravel in the trenches now that the rain has settled the ground. At least the worry of things freezing or breaking has diminished. 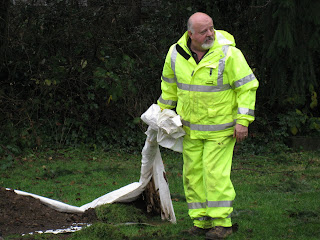 The project started with the assistance of the
Bird boys, but after struggling to get the front part done, they discovered it was much too difficult and dangerous to try to do the underground drilling around the underground electrical line. 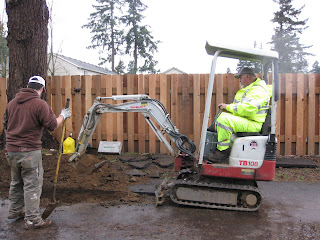 So the back half was dug up with a back hoe or hard labor. 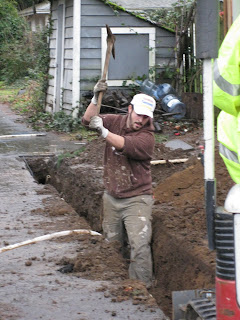 Both of which took time in preferably daylight hours. (Which was tricky since it gets dark so early, and by the time Tony and Zack were off work it was very dark.) Tony had to take a few days off of work, as did Zack. Thank goodness Zack was around to lend his muscles since Tony's were very tired out at the end of the day.
. 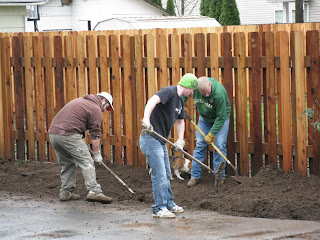 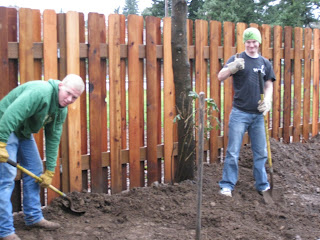 Once Tony allowed some more help to come in for the final fill, it only took about 20 minutes. What a blessing it is that there are so many willing to lend a helping hand when needed. Its our responsibility to not deny others the blessing of service.
Thank you Brandon, Ryan & Scott Bird for your expertise, and the use of your equipment. As well as the missionaries, and Hod Donkin, we really do appreciate it!

Posted by Lorna DeRoest at 9:29 PM

I'm glad that y'all had so much help though I know it was a headache. And am happy that you have water again!