It is amazing the feeling it is of being a grandparent. Seeing little ones that reflect likenesses of two people in love. What a great reward, or should I say Miracle the Lord has given us here on this earth.


I have always looked forward with great anticipation for this day to come, yet Tony wondered if he would be here, to enjoy the rewards of being a parent. That's all the more reason to believe in miracles just watching him being totally mesmerized my someone so small, yet so powerful that we all could just sit and watch in awe. This past couple weeks have been very powerful indeed to behold. A time I know I will forever treasure.
Posted by Lorna DeRoest at 7:27 PM No comments:


Grandma DeRoest spent the past couple weeks in California helping Terri after her surgery, as well as enjoying all the family there during Christmas. When she returned to Portland on the 28th we all went to her house for a Christmas gathering and dessert. It also gave her the opportunity to meet Ethan for the first time. It took a few minutes for him to warm up to all the unfamiliar faces, however in no time he brought out his charm so all could enjoy, and admire.
Posted by Lorna DeRoest at 8:35 PM No comments:

The tradition continues for matching PJ's at Christmas, so no matter where we are, we are still united. Peter,Jessica & Ezekiel's pictures are yet to come.
Anthony, Chelsea & Ethan's PJ's have a whole new meaning in celebration and support of Anthony's accomplishment.
Brent and Randi came to town the 26th, so we celebrated as a family that evening. We all missed not having 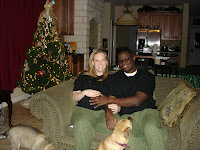 Naomi and Michael with us, however the important thing is that Savannah continues to be safe and healthy.
Posted by Lorna DeRoest at 7:37 PM No comments:


Brent and Randi came to town last night, so we had our family Christmas and dinner here at the house. Peter, Jessica & Ezekiel came by for a short time before, however needed to leave by 4:00pm to tend Peter's sisters little girl. They didn't even get to see Brent and Randi before they left.
I had a fun time putting together a family calendar this year with allot of pictures from this past year, in hopes that we can all be mindful of each others special events to either send a message, or give a call. Its always nice to be remembered.
Within the calendar each month mentioned a gift we all have been given, based on a great movie "The Ultimate Gift". It was a friendly reminder of how blessed we truly are.
Lauren Yeaman joined the family festivities with Rodney. She may have thought she knew the family before, however I'm sure now that the dynamics have changed she looked at the family differently. Actually we weren't to crazy.
Part of the fun of the evening was listening to the guys pick out and practice a song to sing at church on Sunday. I really miss the music in the home, even all the corny songs that they would make up as they go.
Posted by Lorna DeRoest at 6:56 PM No comments:

Merry Christmas to all !!

Christmas was pretty relaxed compared to the earlier years. This year especially I have noticed the many changes that are taking place with the family being spread apart. It was 10:00am when Rodney and JoAnna woke up, so we all worked to make quiche for breakfast, before opening gifts. Peter,Jessica, and Ezekiel surprised us by coming by right when we started. The focus was not the gifts, but the time we could be together. The biggest hit for Rodney and JoAnna were there night blinders since they are both such night owls.
I'm going to miss Ezekiel when they head back to Rexburg Idaho. He is really focused on his mom however, so wasn't interested in others much, but still a cutie. I just know how much he will grow by the time I see him next.
Posted by Lorna DeRoest at 6:53 PM No comments: 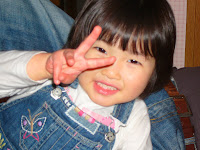 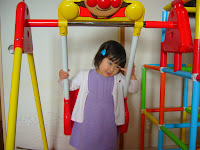 It was so exciting to hear from Miyuki & Shinichi on Christmas via e-mail. Its been so very long. Marin has gotten so big, and adorable as ever. I feel like our link through the blog will be able to close in the miles we have between us, and hopefully some day we will be closer together again. For now however I am just grateful to communicate via the internet.
Posted by Lorna DeRoest at 6:41 PM No comments:

Christmas Eve was spent at Chelsea's parents home for a wonderful dinner, and visiting. Of course the main focus was the cute little man. It was Rodney's first meeting which was a hit. Ethan recognized his uncle by the similar looks of his daddy, but quickly realized it wasn't him when Rodney didn't react the same crazy way.

Posted by Lorna DeRoest at 9:59 PM No comments:

The long awaited day finally came to leave for Albuquerque, however the weather and airlines ended up being a bit of a setback causing my flight to be delayed a couple hours. I was however able to catch my next flight in Salt Lake on time. Tony's flight went out of Portland in the afternoon also later, and then from Las Angeles to Albuquerque arriving by midnight. It was a long day for us both.
Friday morning we went to Anthony's school for a tour, video presentation that let us know just what Anthony has been involved with these past three years. I can now understand why the PJ's are considered the elite of the elite. As a mom I just need to keep my focus on extra prayers for his safety, and feel proud of his desire to serve others.
About mid-day the snow and wind picked up to the point of a blizzard effect, which made it quite interesting come time to dress up for the actual dinner. Nothing however could stop the excitement of this day for Anthony, but also Chelsea, and some excited parents. I know the rest of the family would have loved to be together for this event had it not been during the most expensive time of the year, or the craziest time to travel.
Ethan was so fun during the evening not only because he is so cute, but also because he was so talkative, and entertaining. Everyone enjoyed his happy go lucky personality.
Tony stood toward the front recording the ceremony, as Chelsea and I stood at the other side with tears of joy streaming down our cheeks. A great milestone has been met for many this day. 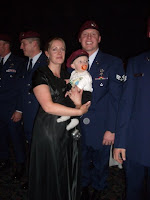 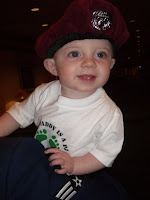 Posted by Lorna DeRoest at 4:52 PM No comments: 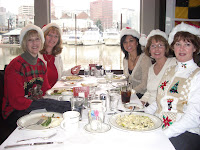 At the close of each year, and in celebration of the Christmas season the staff and crew at work get together for a Christmas luncheon. Rather than exchange individual gifts this year we all made 6 dozen cookies, or candy for an exchange. 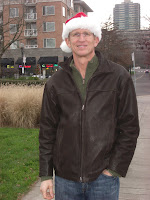 Dr King however still gave each of us a generous gift, along with the lunch and walk downtown to enjoy the Christmas spirit. The unique part of the outing was he brought each of us a red hat 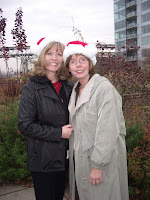 to wear, so we were all matching, and brought many smiles on others faces. Thus spreading Christmas cheer. 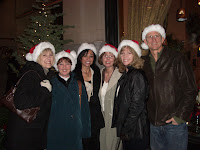 Posted by Lorna DeRoest at 8:22 PM No comments: