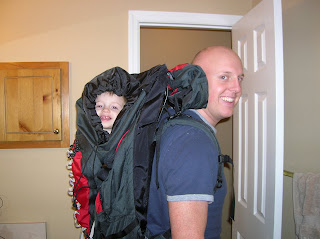 Today we had an early lunch before heading out the door. Thankfully (and just in time) we got a call from Anthony! I'm glad he caught us because each contact from him is unexpected & at different times.
He is in his second area since leaving the initial base. He got to see Laura's uncle on Sunday at church. (They met when we were at the Orlando Temple-Laura's one of my past roommates). He sounds good & says he won't have the internet for about a month. He enjoys thinking of future reasons to call though. (: Like when they actually have an address so I can send things.
I guess the calls have worked out so far. (As in, I have plenty to fill him in on & he can't say much about what his days are like). Ethan smiled from ear to ear when he heard daddy's voice. He talks about him throughout each day & is happy to watch videos or see pictures. Every airplane he sees, or hears, is daddy. Along with trees that remind him of the old one he & Anthony would climb.
Ethan knows his surroundings well. For months as we drive toward the base he'll say 'daddy' & 'buh-bump' (huge speed bumps). He's know the church neighborhood for at least that long as well & will say 'babies' since he loves the nursery. And, sadly, yes as we pass Taco bell now he'll say taco. Hard to believe he's about to turn two!
We love you
Posted by DeRoest's in GA. at 3:55 PM

What great news. Thanks so much for the update. It's very good that you were able to speak with him and to know that Ethan is growing so maturely; recognizing his world around him. All our love, Papa D.

Thanks for keeping us updated on Anthony, Chelsea. Our thoughts and prayers are with him! Thank you for supporting him and allowing him to serve our country!
We love you!
Give Ethan a big hug for me!
Aunt Cathy

I am grateful that Anthony has had oppurtunities to call you with his updates. That puts everyones minds at ease, but also gives you a real boost I'm sure. That you for sharing the updates, we really look forward to them, as well as appreciate your great support.
Lots of love, momma D.