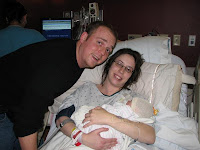 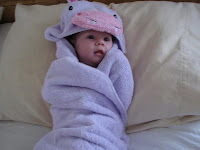 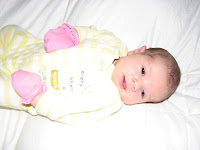 Six months ago when Brent & Randi moved to Sierra Vista Arizona I never would have know that we would in some way be reconnected with my brother Lonnie's son Cory who is the same age as our Rodney. He was just a small boy when I last saw him, and we had only heard of him moving around, but not knowing his address we didn't keep in touch. I always felt bad being so disconnected, but I have been disconnected from Lonnie as well. We see each other so seldom, but when we do get together I really treasure it.
After finding out in late August that Cory was not only in Arizona, but living and working in the same town as Brent & Randi. Brent made a visit to Lowe's Hardware to introduce himself, and bring Cory pictures of his dad (Lonnie)that were taken at Uncle Ron's wedding at the end of August 08. Since then he and Brent have had a few opportunities to get together, or visit.
Yesterday I received an e-mail from Brent that was a forward from Cory with pictures of his new baby girl. She was born on January 14th, at 8:38pm. Weighing 8 lbs,7 oz. 21" long. What a cutie. It is hard to believe that Cory is not only grown up, but is now experiencing the responsibility of a little one. I hope he feels the great joy that comes with being a parent. There truly is not greater joy.

With this I also want to congratulate Grandpa Lonnie, and hope that he will once again appreciate this great stage of life we are in. I am anxious to make a trip in April for the birth of my grand daughter Brennalyn, then also get to see little Addison Grace Allen as well.
Posted by Lorna DeRoest at 3:17 PM

Isn't it amazing how small the world really is. We are excited for Cory, he seems so happy to be a dad. Thanks for posting this so the rest of the family can be informed.

Your really quick to respond. I hadn't even finished this blog before I noticed your response. Hopefully other family members will read it and be excited also to hear the news.
Love ya, Momma D.

What a sweet little girl. That's great that you're able to reconnect in unexpected ways. I love those 'small world' moments.

She is a beautiful little girl! So glad to see pics and find out how Cory is doing in AZ. It's so great that Addison and Brennalyn will be so close in age. I hope that they can be great friends!