The new surroundings for Ezekiel 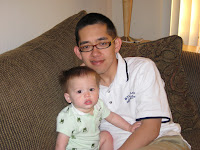 Peter and Jessica have moved temporarily outside of Oakland California for a summer job, which has been a new adventure for all of them. 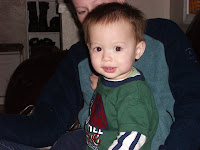 Ekekiel hasn't seemed to mind to much. In fact the day before mothers day he decided he could see more and move faster by walking. There is no stopping him now. Mothers day they went as a family to see the Oakland Temple. 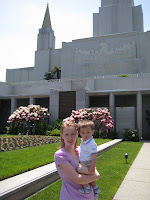 The picture brought back memories for me since it was the temple Tony and I were married in.
A form of entertainment he enjoys is feeling the vibration of the washing machine against his face. 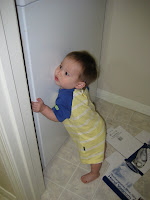 However when Jessica tries to join him, he will push her away. He hasn't learned the concept of sharing yet. 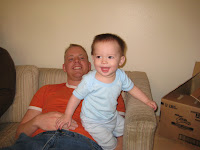 Rodney moved also in hopes he could work hard and save allot, however he is so far away from his sweetheart, he plans to return the end of the month.
Posted by Lorna DeRoest at 10:09 AM