I was so excited when Randi and Brenna decided to come here to Portland this weekend as my Birthday gift. 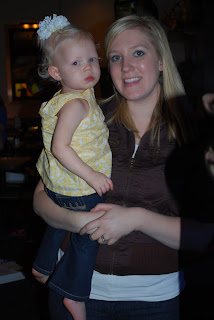 With the kids living so far away, I don't see my grand babies as often as I'd like and they all change so much so fast. Of course when children are at this stage of life change is a constant.

I can't say that Brenna was excited to see me at the airport. I look different in person, than from the computer on Skype. So when she saw me walking toward her at the airport she started backing up. I knew then not to approach her too fast. Though it didn't seem to take too long before she was calling out "Grama D."

Their flight arrived on Thursday night about 9:00 pm, and as they walked into the door at the house Brenna walked straight over to the toys that were off in the corner of the living room, not even in sight. It was like a magnet drew her straight to it. 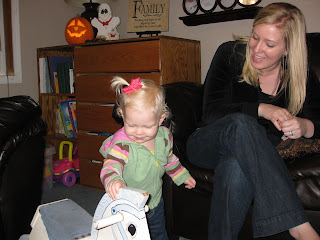 She was so not ready to go to bed, which gave me a little time to get down and play with her. Her eyes went directly to the pumpkin, and from then on the pumpkin light needed to be on day and night, she would tell me "pumpkin on." She didn't think much of the building blocks, but the rocking horse seemed to be enjoyed, and drew her attention quite a bit. 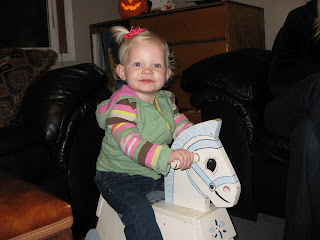 Occasionally the rocking chair got attention as well. 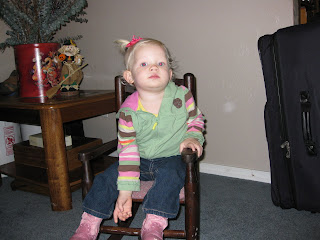 Grampa decided to get Brenna's attention by making her chocolate chip cookies. 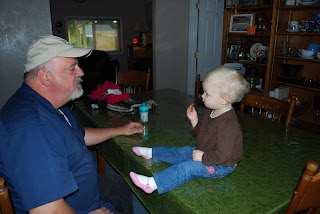 Something she has never had, and I'm not to sure that she will have more any time soon. Randi has really tried to not introduce her to sugar, which is something I can really appreciate. None of us need the poison in our bodies, yet everything has sugar in it. Who say's that we don't have an addiction? As one of our patients said at work, "but it's so yummy".

We really had a great time. I wont be able to post on my blog for a few weeks, but I will add in some more pictures of all of the fun we had.

You're memory's leaving you Mother... We were all in Portland last Christmas break, and you saw them on Brenna's Birthday and this summer as well as. We live far away, but we try to keep the visits frequent. Love you~

Mmmm Daddy's chocolate chip cookies. I want some. And Yes I am addicted!