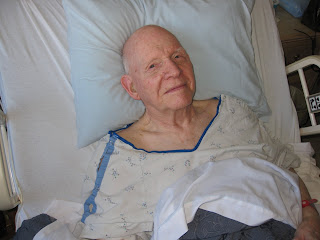 This has been a very challenging week for Pops having to deal with health issues, and relocation. Due to the circumstances however it has forced both mother and Pops to realize that it is time to make some permanent changes for them.
Monday Pops fell two different times, both of which 911 was called to help him back into his chair. They were told at that time that next time he would be taken to a facility that could help care for him.
Tuesday he stayed in his scooter, rather than rely on his walker, however was confused how to turn the speed down, therefore turned it up full blast, which caused him to use the walls, cabinets, and anything in the way as bumper cars. Needless to say the two days events have left him very sore, and unable to move much on his own.
Wednesday his Dr. made a house call and ordered an ambulance to admit him in the hospital for an evaluation. He seemed to do well for the three days, but by Friday just talked of wanting to go back home. He was told by all that his next move would be into Cascade Terrace for assistance, until we could get things arranged to move mother and he together. 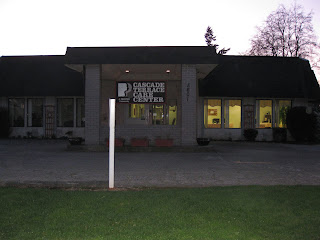 That didn't settle to well. He became very sober, and not his jovial self. Yesterday he seemed to be in a little better spirits and was able to lift his arms better without allot of pain, but they still hadn't been able to get him up, and he is unable to do so on his own at this time.
I see many changes in their future, but also in ours. Allot of uncertainty. I just pray that I can be a strength to them, and keep my spirits held while dealing with my own uncertainty. Truly a time to rely on a loving Heavenly Father for the strength to endure all things, and endure it to the end.
Posted by Lorna DeRoest at 12:36 PM

I am sorry mom and dad. I know this is a hard time for the both of you dealing with this. you are in my prayers. I love you and say hi to grandpa for me. Good luck with the relocation hunting. I hope you can find something soon.

I hope that everything can settle down soon and be settled for Grandpa & Grandma as well. Keep us posted! Love you all.