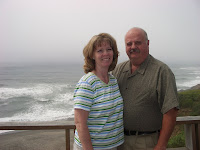 With the weather 104' last weekend in Portland we decided to beat the heat by going to the beach where it never reached 70', 68' was the standard. In fact we were chilly at times, but grateful for the beauty around us. Peter's sister was nice enough to let us stay at the beach house with her and her daughter Ava who is almost two. Like any two-year-old she was perfect with us when her mom left her to go to the store, then she changed her attitude when mom returned. She was a lot of fun to play with, as well as entertain us. 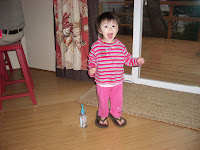 She became quite attached to JoAnna, or Jo as she called her, as well as anything of hers. (flip-flops, hair brush, socks, shoes) 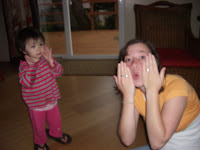 JoAnna taught her to make a fishy face that was very cute, I read her stories, and Tony made faces or tickled her to make her laugh.

On the way to the beach we drove through Tillamook, and stopped at the cheese factory for squeaky cheese, and ice cream. It really surprised me to find out that Tony had never been there, so we took extra time for him to enjoy the observatory. How he has made it 52 years without ever going their is beyond me, but we had a good time. 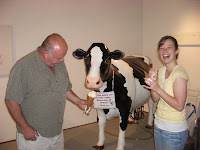 While Tony went golfing in Lincoln City on Saturday JoAnna and I went to a few stores looking for saltwater taffy. Who would have ever thought it would be so hard. No one carried it. I told them that was silly, it's the beach they have to have some, but no such luck. We decided to go for a walk onto the beach since we could walk straight out to the water rather than have to hike down the mountain. The beach house sits up on the bluff overlooking the ocean which makes it a little more difficult to get to.
Posted by Lorna DeRoest at 8:11 PM